'Like many other arborists, I am incredibly passionate about our industry. I enjoy every aspect of my job and having the right gear to be able to do the work quickly, efficiently and safely is imperative. Nowhere is the gear debate more hotly contested amongst arborists than that of the top-handled chainsaw. I was lucky enough to receive the latest ECHO CS-360TES top handle saw at the 2014 Confor APF fair. I was awarded the chainsaw as a prize in a competition held by TKF Training. I have been so impressed with this chainsaw that I would like to share my thoughts on it.' 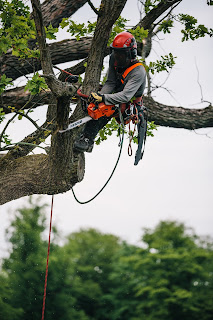 'Out of the box I noticed marked improvements on the previous model (note also that the CS-350TES was the first top-handle I had owned). In particular, the ergonomics felt better and the chain brake was slimmed down and felt much more robust. I was initially disappointed to find a felt air filter as opposed to the gauze in the 350. However, it proved to be a very clean running saw, never accumulating much debris, even after the hardest day smashing the nastiest Leylandii. After running the saw for longer, it got better and better, having much more low end grunt and guts. Pulling at the 14 inch bar supplied was no bother, it only ever so slightly bogged down in the cut when I buried full bar in Beech.'

'Other noticeable improvements on the 360 were the increased throttle response and pick-up I did after running it fully. I switched to a 12 inch bar but this was solely due to personal preference. The only gripe I have with this saw, which I feel could use a bit of work, is the tuning screws being more user friendly - it would have saved me a trip to the dealer.'

'Having used all of the popular arborist chainsaws, I am extremely satisfied with this saw having given it hard use in a professional environment for 10 months. In an industry dominated by two “big boys” ECHO have stepped out of the shadows with an excellent product and more traditional tool. The ECHO CS-360TES top handle chainsaw easily stands up to the rivals.'

Welcome to the ECHO Media Room.

This area of the echo-tools.co.uk website contains product, service and feature news and information for ECHO tools in the UK. It is open to the press, bloggers and the general public.
For more information on any of the articles featured here, please email pr@countax.com or contact the Countax Marketing department using the details below:
Public Relations
Ariens Company Limited
Countax House
Great Haseley
Oxford
OX44 7PF
Tel: 01844 278 800
Email: pr@countax.com